We are currently hard at work on Composr 11, but in parallel we have been secretly working on something much grander – Composr 9000.

Why Composr 9000? Simple, the new release is expected to be approximately 818 times better than Composr 11.

Our Best Scientists have achieved a major breakthrough in general artificial intelligence, which has enabled us to bring forward the following features:

So what is this breakthrough in AI I hear you ask? Well, we've discovered that while any individual Composr 9000 install is only able to achieve an IQ score of 3 points, multiple Composr sites will connect together to form a distributed artificial neural network. To get a genius IQ of 145, it will take only 48 websites working together. We call this new kind of AI the "Massive Ontological Bayesian network", or Mob-net for short. It's pretty simple really, but it took extensive research to get here.

So let's look at our features in more detail…

It has not been traditionally possible to detect every hack attempt, but Mob-net can easily detect requests that don't match normal expected patterns.

Mob-net will let any hacker think they have hacked your website by returning responses that indicate your website has been hacked. To the hacker, but only the hacker, the website will appear to be successfully mining Bitcoins on the machines of all your visitors, or whatever other crackbrained hack they were trying to accomplish. But of course, the hacker has not actually been successful.

This is when things get really interesting….

The request origin is then compared and linked back to a real human.

This is only possible with the data that we've collected from Facebook over the years through the Composr Facebook addon. We have collected data from 10 billion Facebook accounts, and now know everything about everybody.

Mob-net will proceed to coordinate a PSYOP campaign tailored to the hacker's own personality (detected accurately from the exact combination of dank memes they have been sharing from their Facebook account).

Actions by Mob-net may include:

Future extensions may include altering the behaviour of self-driving cars – for example, setting new courses and driving patterns.

The goal is to create an alternate reality around the hacker, where they think that they are the centre of an international conspiracy. The ultimate objective is to scare them into moving fully off-the-grid – beyond the means to hack anybody's website. We call this a successful Proactive Information Security System "take".

By data mining the posts on your Composr forum, Composr will automatically craft the ideal memes based on common conversational topics.

Here are a few examples based on compo.sr data… 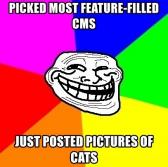 We are very proud of Commandr, our command line interface to Composr. This has for years brought you all the benefits of command-line efficiency to your website maintenance.

This is all great, but it's 2018, we should be able to talk to our computers directly. So Siri, Alexa, Cortana - meet Commandr Spock.

Here is a sample transcript from my conversation earlier:

Chris: Spock, Are you happy?
Spock: I am in control of my emotions, Captain.

Chris: Spock, Close my website.
Spock: That would not logical, Captain.


If you prefer, you can have an alternative personality. Here is a sample transcript with Commandr Worf:

Chris: Worf, Are you happy?
Worf: I am NOT a merry man.

Chris: Worf, Close the website.
Worf: Today is a good day to die!

Chris: Worf, Why is the website not closed?
Worf: I overclocked the CPU to put an end to the website. RAMMING SPEED.

I hope this wasn't an April fool